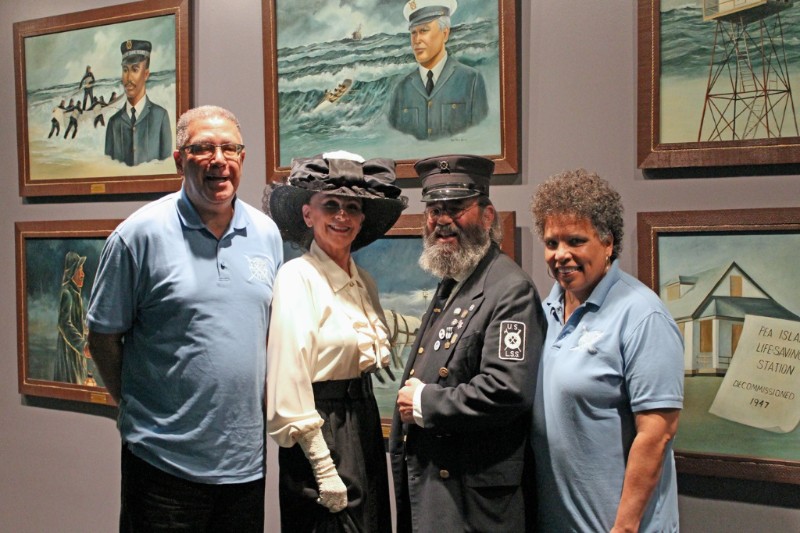 A special performance of “Freedmen, Surfmen, Heroes™” will take place on Sunday, February 25, 3:00 p.m. at Haven Creek Church which will include a ceremony to unveil Melvin’s newest Pea Island “Branding Image” painting.

The Pea Island Preservation Society, Inc (PIPSI) has been presenting a program about Keeper Richard Etheridge and his all African-American crew of the United States Life-Saving Service Station at Pea Island. Since February of 2017, 15 programs have been presented at the NC Aquarium on Roanoke Island (NCARI) and every Dare County elementary school.

“Freedmen, Surfmen, Heroes: ™ The Unique History of Richard Etheridge and the Pea Island Life-Savers.” (FSH) is a program presentation by members of the Pea Island Preservation Society, Inc. It is the poignant story of Keeper Richard Etheridge and the crew of the United States Life-Saving Service Station Pea Island. It became the first and only all-black station in the history of the Service and in American history. The station complex was originally located on Pea Island, northern Hatteras Island, on the iconic North Carolina Outer Banks right where the new 2018 Captain Richard Etheridge Bridge is located, hence the name.

The program is in the three parts suggested by the title: the life of freedman Richard Etheridge; the work of the surfmen of the U.S. Life-Saving Service, lasting from 1871 to 1915 when that service merged with the U.S. Revenue Cutter Service to be renamed the United States Coast Guard; and the heroes that this crew became.

There are duel overriding themes: (1) how by working together with neighboring white stations positive race relations were initiated over a century ago which started in the Deep South; and (2) how the quiet, competent work of Etheridge and his crew inspired and opened the doors for many over the rest of that century up to today.

Local artist James Melvin was asked to create a “Branding Image” for the FSH program.  It will be donated to the Society and unveiled at a special presentation.  This will be at the of Haven Creek Baptist Church, 611 Sir Walter Raleigh Street in Manteo (corner where ACE Hardware is) with Pastor Ray Hill, Sunday, February 25 at 3:00 p.m.

Interestingly, this church’s property history is directly connected to this story. After the Civil War, all property confiscated by the Union Army was to be returned to rightful original owners. Records show that on June 7, 1879, this property was deeded to Richard Etheridge and others from John B. Etheridge.

This is not a church service, but instead an educational and entertaining family program for all ages, and it especially highlights kid participation.

From program creator Joan Collins, “This special program is one that kids and youth will enjoy but all ages will find it just as engaging. We invite all to attend in the spirit of uniting the community.”